You can find on this page the Vancouver tourist map to print and to download in PDF. The Vancouver tourist attractions map presents the monuments, museums, parks and points of interest of Vancouver in British Columbia - Canada.
Many tourist visit Vancouver to see the city gardens, Stanley Park, Queen Elizabeth Park, VanDusen and the mountains, ocean, forest and parklands which surround the city (see Vancouver tourist map). Each year over a million people pass through Vancouver on cruise ship vacations, often bound for Alaska. 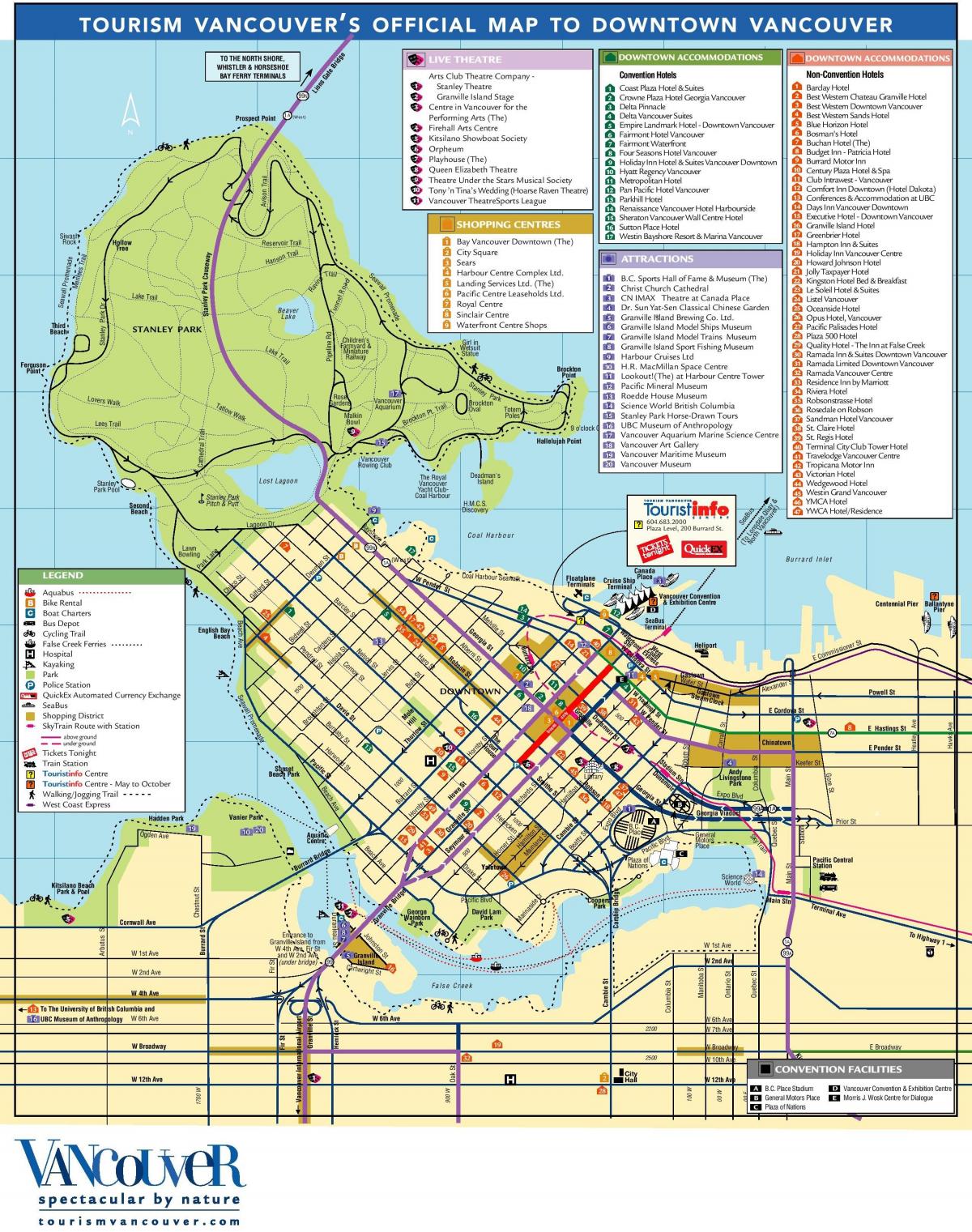 Map of Vancouver points of interest

The Vancouver sightseeing map shows all tourist places and points of interest of Vancouver. This tourist attractions map of Vancouver will allow you to easily plan your visits of landmarks of Vancouver in British Columbia - Canada. The Vancouver tourist map is downloadable in PDF, printable and free.

Since the early years of the city, tourists have been drawn to Vancouver for the spectacular views of its natural setting. With the completion of the Canadian Pacific Railway in 1887, Vancouver became a tourist destination. In 1902, business leaders got together to form the Vancouver Tourist Association, which published maps and brochures; two years later, the Great Northern Railway made a direct rail connection between the city and the USA. Sightseeing tours highlighted the growing city, showing off Stanley Park’s forest, Capilano Canyon, the West End and Shaughnessy mansions. Tourism still plays an important role in the city economy and over 8 million visitors come annually to experience Vancouver’s natural beauty and livable lifestyle. 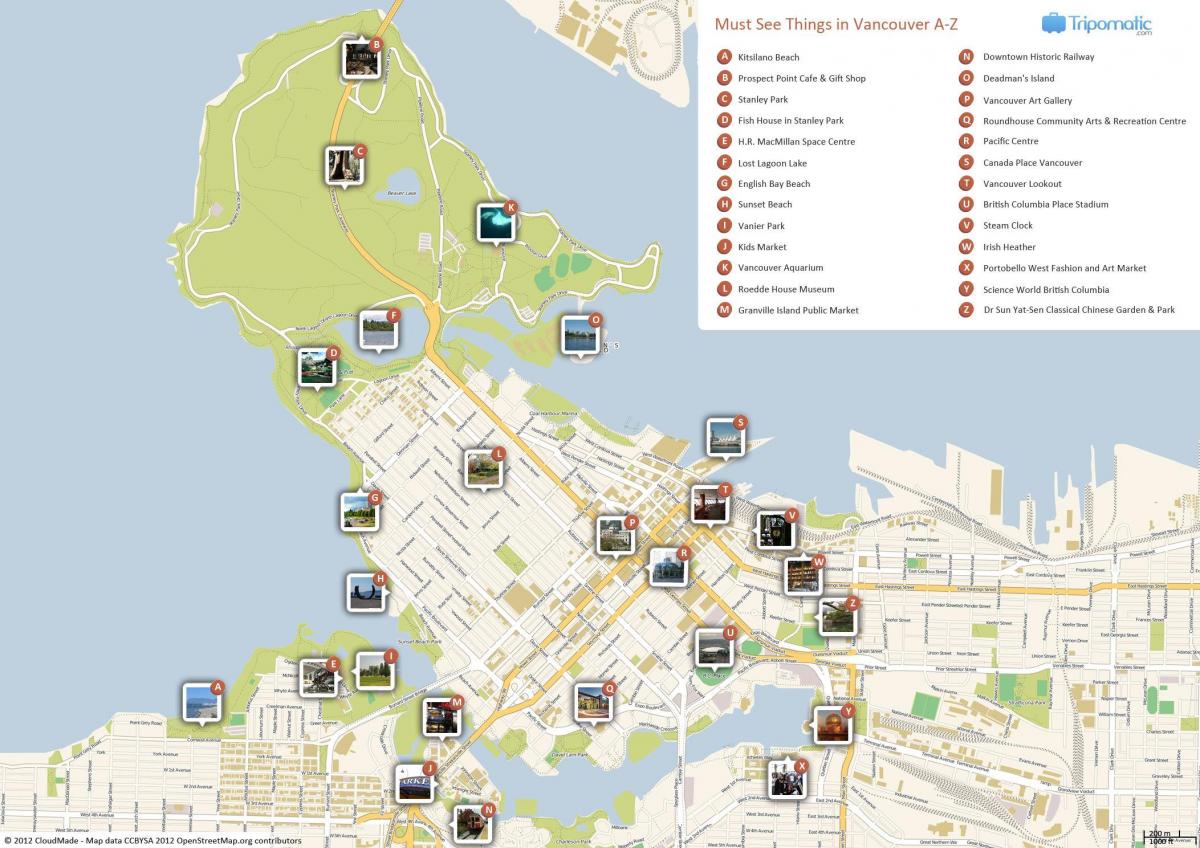 Stanley Park as you can see in Vancouver attractions map is a lush peninsula of huge trees adjacent to Downtown Vancouver. If you are looking to get outside and enjoy some nature, this is the best place to visit in Vancouver. A paved seawall path encircles the green space and is a wonderful place to explore on foot or by bicycle. Inland, the park offers many things to do, and you can spend a full day exploring attractions like the totem poles at Brockton Point or the Vancouver Aquarium. Spectacular views are a standard throughout the park either back towards the city or out to the ocean. Once mainly industrial, Granville Island is now a thriving center of activity with a relaxed and distinctive atmosphere. Artists and retailers have moved into converted warehouses alongside houseboats, theaters, galleries, and restaurants. The Granville Island Public Market is one of the most popular attractions selling fruit and vegetables, seafood, and a great variety of other specialties as well as ready-to-eat items.

In both winter and summer, Grouse Mountain as its shown in Vancouver attractions map, offers an unmatched panorama in clear weather. That is especially so in the evenings when the city lights are on. A gondola operates daily running from street level to the summit, where dining, activities, and wildlife await mountaintop explorers year-round. When the snow flies, Grouse Mountain is a winter wonderland offering outdoor skating, snowshoeing, skiing, and snowboarding. Part of the University of British Columbia, the Museum of Anthropology deals with cultures from around the world, but places particular emphasis on British Columbia First Nations. Exhibits display native art, including large totem poles in the Great Hall. Other presentations explore ethnographic and archaeological objects representing Asia, the South Pacific, the Americas, Africa, and Europe. Other attractions on the university campus include the clothing-optional shoreline of Wreck Beach, the natural-history-focused Beaty Biodiversity Museum, and the rambling UBC Botanical Garden with its many interesting plantings and delicate Nitobe Japanese Garden.

The sandy shoreline of Kitsilano Beach as its mentioned in Vancouver attractions map, defines the laid-back, fun-loving Vancouver lifestyle. It is a place locals hang out with friends or take a dip in the outdoor heated seawater swimming pool. The wide beach here is popular with sun bathers in the summer. The oldest part of the city, Gastown is an area of restaurants, galleries, and shops set in carefully restored Victorian buildings. Heritage structures, cobblestone streets, and iron lampposts give the district its distinctive atmosphere. Gastown is a short walk from Canada Place. If you arrive in Vancouver on a cruise ship, Canada Place is where your trip begins. The unusual roof design creates the impression of a huge sailing vessel. The architecturally remarkable structure is part cruise ship terminal, part convention center and hotel, and part hub for sightseeing bus tours. At the end of the pier are panoramic views and the Flyover Canada attraction – a flight simulator that assaults all your senses while giving you a Canadian geography lesson. Also nearby, Waterfront Station is a major transit hub with ferries departing for the public market at Lonsdale Quay in North Vancouver. 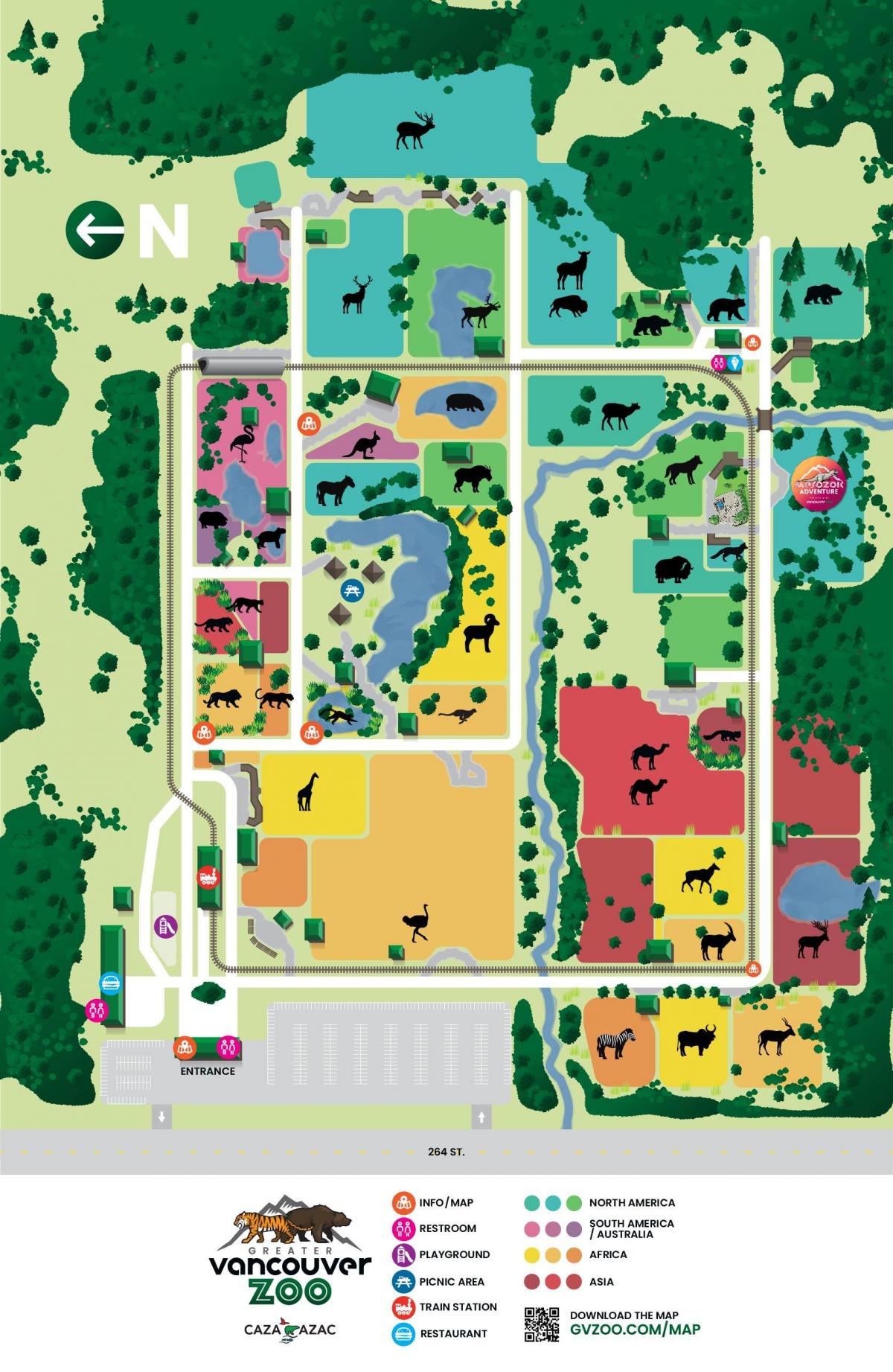 Dedicated to education and conservation, we are home to many rescued, donated, and orphaned animals. The mission of the Greater Vancouver Zoo is to inspire appreciation of our ecosystems and support conservation efforts by engaging the community. Established in 1970, the Greater Vancouver Zoo has grown from a small drive-through to one of Canada premier zoological destinations and a dedicated contributor to species conservation. Discover the sights and sounds of 140 species on 120 acres in the heart of the Fraser Valley as you can see in Vancouver zoo map. Over the past two decades, Canadian zoos and aquariums have shifted their focus to become places not only of education and inspiration but of action. Conservation action both internationally and locally is paramount, second only to animal health and welfare. This is another area that has progressed in leaps and bounds over the past two decades. Health and welfare are now viewed through a holistic lens. An animal’s emotional health is now just as important as its physical health.

Located at 5048 264th Street in Aldergrove BC as its shown in Vancouver zoo map. If taking Highway 1, take Exit #73. We are 1.4km south on the left side. Pay parking is a $8.00 flat rate. Parking meters are found just outside the Zoo's entrance. The parking meters will ask for your license plate number and will accept the following forms of payment: Visa, Mastercard, and American Express. No cash accepted at machines. Cost is $8 for the whole day. Parking is maintained and monitored regularly by Impark. The Greater Vancouver Zoo is not responsible for lost or stolen items left in your vehicles or on the premises. Please do not leave anything of value unattended.

In recent years the Greater Vancouver Zoo has been open between 9 am and 7 pm from April to September, and from 9 am to 4 pm from October to March as its mentioned in Vancouver zoo map. As of October 2021, the zoo is open daily from 9 am to 4 pm on weekdays and from 9 am until 5 pm on weekends. For the most up-to-date hours and information, see the zoo official website. The zoo is located at 5048-264th Street in Aldergrove, just past Langley in the Fraser Valley, about a one-hour drive from Vancouver when traffic is good. You will need a car to get to the zoo as there is no public transit, and you’ll want to avoid rush hour traffic going to and from Vancouver.