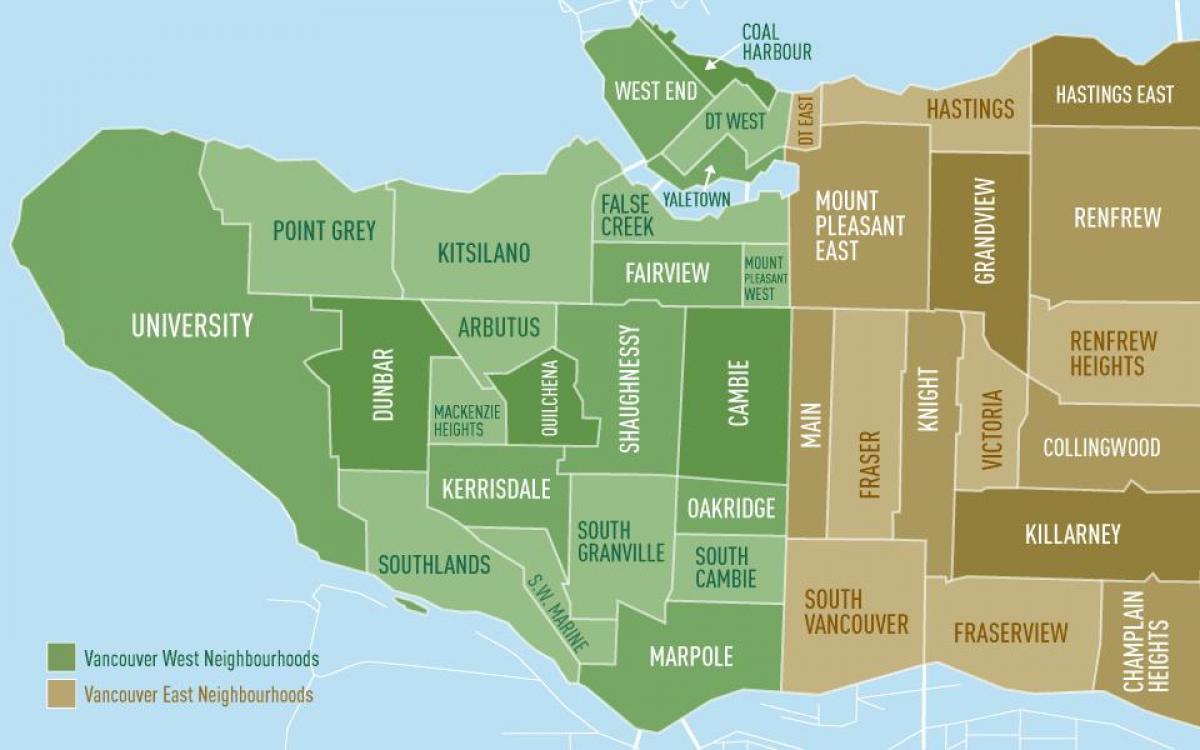 Despite the fact that Coal Harbour is right downtown, it is a surprisingly calm little neighbourhood, right on the water edge. It is even more surprising given its industrial history as a former shipyard sitting right next to the railway terminus as you can see in Vancouver neighborhoods map. The area starts at Canada Place and stretches west to Stanley Park, and is bordered by Burrard Inlet to the north, West Georgia Street to the south. Coal Harbour is a charming mix of business and residential, being home to both the Vancouver Convention Centre as well as condo towers. Established back in the 1890s, Vancouver Chinatown has been humming busily for more than a century with vivid colours, exotic cuisine and a vibrant culture. Vancouver Chinese population originally made the journey to work in local mines and build the Trans-Canada railway. Rich in history and architecture, this area east of downtown boasts North America third-largest Chinatown after New York and San Francisco. The main commercial area runs is around six blocks, bordered by East Pender Street, Gore Avenue, East Georgia Street, and Carrall Street.

A culturally rich and authentic neighbourhood, Commercial Drive - also known as The Drive - is one of the best and most colourful shopping, dining and nightlife districts you will find in the city; and boasts home to Vancouver own 8 block officially designated Little Italy, representing more than 60 years of Italian heritage. Day or evening, The Drive offers 22 full blocks to explore with over 300 distinct merchants, including quaint boutiques, an eclectic collection of restaurants, a vibrant live music and bar scene, dinner and dancing, theatres, coffee houses, specialty food stores and bakeries. Vancouver oldest neighbourhood, Gastown grew from a single tavern founded by John ‘Gassy Jack’ Deighton back in 1867. Today, the district retains its historic charm and independent spirit. Victorian architecture houses a thriving fashion scene, impeccably curated décor boutiques, one-of-a-kind galleries and some of the best culinary fare in Vancouver. It is a gathering place for stylish locals and an ideal neighbourhood to explore on foot. Gastown as its shown in Vancouver neighborhoods map, lies along the north of the downtown Vancouver peninsula, from Richards east to Main Street, and south to Hastings Street.

In the early 1900s, Granville Island was home to factories, plants and sawmills. Things are a little different today—Granville Island is both a locals favorite and a huge draw for visitors. Technically a sandspit and not an island, the neighbourhood sits just south of the downtown peninsula, right under the Granville Bridge. The Granville Island Public Market as its mentioned in Vancouver neighborhoods map, acts as a hub of activity, but it is also one of the city most important cultural districts with theatres, artisan workshops and craft studios. South Granville is a tastemaker paradise. Located in one of Vancouver most affluent neighbourhoods, this swanky yet welcoming shopping district runs from the Granville Bridge to 16th Avenue, and is nestled between Shaughnessy to the south, Kitsilano to the west, and Granville Island and downtown Vancouver to the north. The area was first developed by the Canadian Pacific Railway as an elite neighbourhood back in 1907, and has been a busy shopping district ever since. 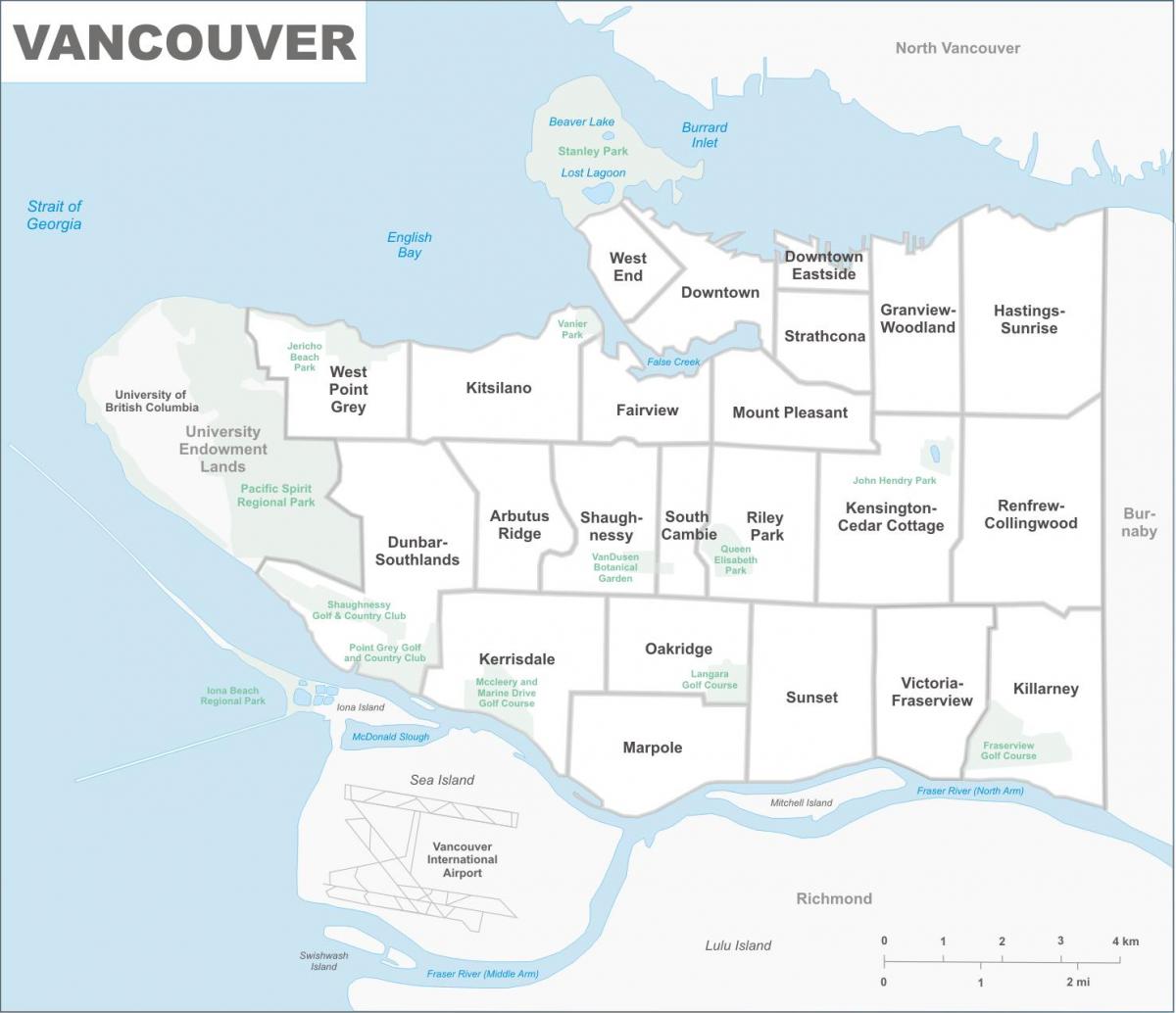 Vancouver is made up of a number of smaller neighbourhoods and communities. Neighbourhood boundaries provide a way to break up the city large geographical area for delivering services and resources and identify the the distinct culture and character of different areas of our diverse population. However, there is some disagreement on all of the names and boundaries of these areas. We refer to neighbourhoods as areas and we have divided the city into 22 distinct areas as you can see in Vancouver districts map.

Travelers and experts alike suggest spending at least a day in Kitsilano. Known for its numerous outdoor activities, beaches and mountain views, Kitsilano sits just south of downtown across English Bay. Here you will find some of Vancouver most popular outdoor spaces, including Kitsilano Beach and Vanier Park. The parks hosts some of the city favorite events like the Vancouver International Children Festival in May and summer Bard of the Beach, which features outdoor performances of Shakespeare plays. Kitsilano district as its shown in Vancouver districts map is also a foodie paradise, boasting dozens of one-of-a-kind eateries. Follow Jericho Beach Park and the Spanish Banks west from Kitsilano and you will find Point Grey, a primarily residential area featuring historic homes and impressive stretches of waterfront. This neighborhood beaches – including the clothing-optional Wreck Beach – provide many great spots for swimming and boating. Point Grey is also home to a handful of popular attractions, including the Nitobe Memorial Garden, the Museum of Anthropology and the Old Hastings Mill Store Museum, which is housed in Vancouver oldest building and the site of its first store.

Vancouver east side is made up of a conglomeration of ethnic districts which feature unconventional shopping, top-notch dining options and plenty of entertainment venues. Commercial Drive – also known as Little Italy – is famous for being Vancouver artistic hub and is packed with art galleries, second-hand shops and plenty of Italian restaurants and cafes. Another well-known cultural pocket is Little India, aka Punjabi Market as its mentioned in Vancouver districts map. Located on Main Street starting at East 49th Avenue and continuing six blocks south, this area is filled with Indian restaurants, markets and boutiques. Sitting northwest of downtown, this suburban section of the city attracts shopaholics with large commercial centers such as the Park Royal, Vancouver oldest shopping mall. West Vancouver other main attraction is Lighthouse Park, a nearly 200-acre forest where visitors can sit and watch seals lounging on the rocks near Howe Sound.