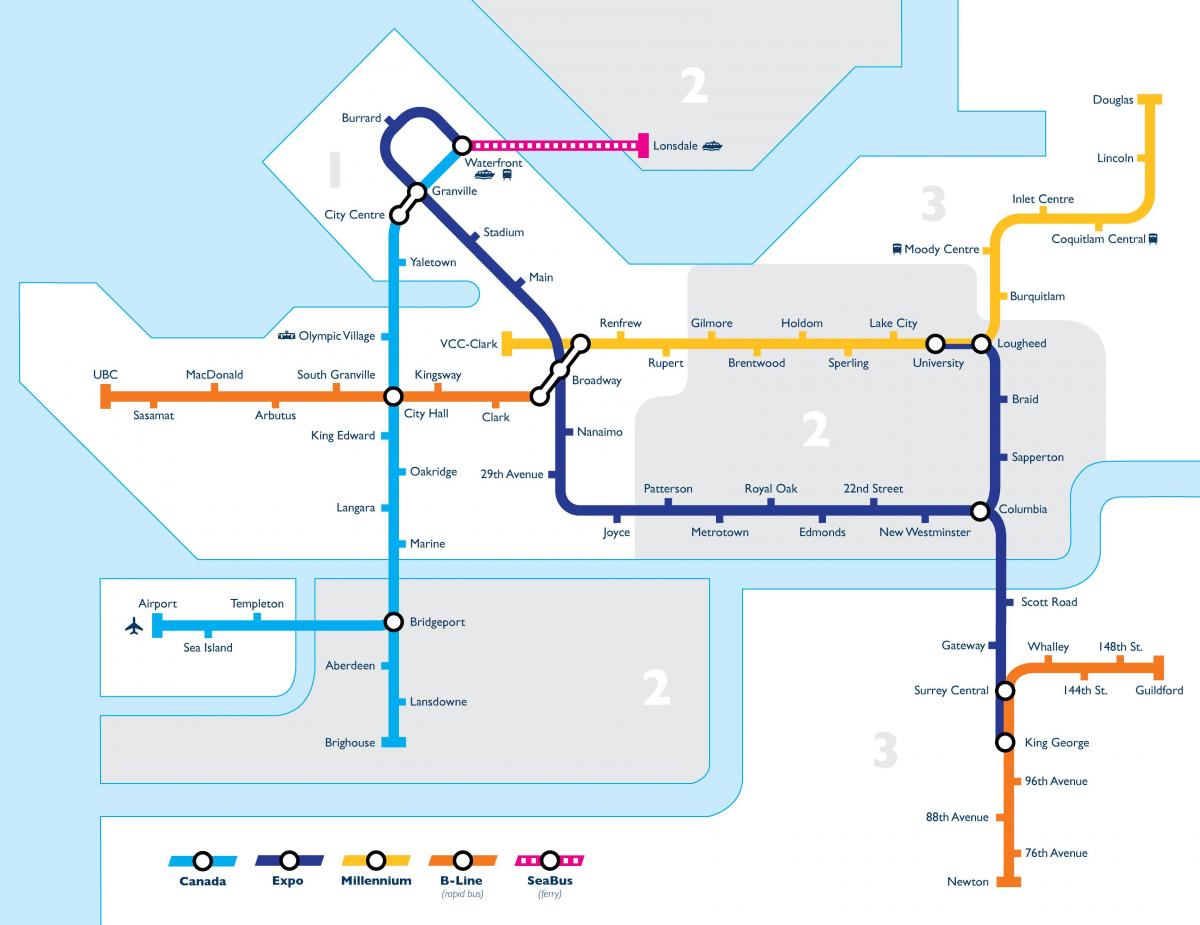 The Vancouver Metro, called SkyTrain, is an automated metro system, similar to the VAL system of Lille and Toulouse. Since August 2009, there have actually been two systems, incompatible with each other, the older Expo/Millennium Line and the newer Canada Line as you can see in Metro map Vancouver: Station platforms are 80 m long, which allows 6-car-trains; SkyTrain normally operates 4-car mark II trains, and 4 or 6-car mark I trains. The average station distance is 730 m in the city centre area and 1750 m in other areas. All stations now have elevators, after Granville was retrofitted with one in 2006. In the beginning trains got names like Spirit of Victoria, Spirit of Vancouver, etc. For the inauguration of the second line a new type of train (mark II) was ordered with cars 17.3 m long (earlier stock 12.3 m) and three doors per side each 1.6 m wide (compared with two 1.2 m wide doors per side on original cars).

From the existing Lougheed Town Centre station, construction on a Skytrain branch to Coquitlam Centre was launched in early 2012 for completion in 2016. The 11 km Coquitlam route was named the 'Evergreen Line' in Dec. 2005. On 18 April 2008, TransLink and the BC Ministry of Transportation announced that the Evergreen Line would follow the 'northwest route' from Lougheed Station, elevated on North Road to Clarke Road, head into a tunnel from Clarke Road north of Como Lake Avenue, emerging at the bottom of the Clarke Road hill to run on an at-grade alignment adjacent to the Canadian Pacific railway line as its shown in Metro map Vancouver. It would then continue to the Ioco Road overpass where it would turn eastward, change back to an elevated guideway northward along the Lougheed Highway to Pinetree Way, and finally turn northward to a terminus just north of Douglas College in Coquitlam. Eventually, instead of creating a separate line, the Evergreen Line [Project Website] opened on 2 Dec 2016 as an extension of the Millennium Line (now 25.3 km) in a reconfigured overall network layout.

The line from Waterfront up to somewhere near Marine Drive -- which runs alongside the Fraser River -- is completely underground, while the line going over the river, to the airport, and to Richmond Centre is above-ground, as the soil in the area was not suitable for building a subway-like system (See Metro map Vancouver). 20 2-car trainsets were delivered by Rotem; these are 41 m long, 3.6 m high and 3 m wide. The system is fully automatic, but technologically not compatible with the existing Skytrain Expo & Millennium lines. Apart from SkyTrain there is the West Coast Express, which only operates into Vancouver in the mornings and from Vancouver in the evenings (5 trains each direction).

Vancouver SkyTrain or Vancouver subway is a completely automated light rapid transit system, offering fast, efficient service between downtown and Metro Vancouver suburbs. There are three lines: The Expo Line runs south-east from downtown Vancouver, out to Burnaby, New Westminster and Surrey. There are four downtown stations as you can see in Vancouver subway map– Waterfront, Burrard, Granville and Stadium-Chinatown. Take one of these trains to visit Science World, get to Pacific Central Station, visit the Commercial Drive neighbourhood, or head out to Metrotown shopping mall in Burnaby or the River Market at New Westminster Quay. Trains run every two to five minutes.

The Canada subway Line runs from downtown Vancouver, before splitting with one extension going to Vancouver International Airport (YVR) and the other heading further south into Richmond as its shown in Vancouver subway map. There are three downtown stations – Waterfront, Vancouver City Centre and Yaletown. Along with getting to the airport, take this line to visit the Olympic Village neighbourhood, Queen Elizabeth Park, River Rock Casino Resort, and Aberdeen Centre shopping mall, and the McArthurGlen Designer Outlet centre. During peak hours, it runs every three to six minutes, and less frequently during other times. The Millennium Line runs east from Vancouver, starting at VCC-Clark station and continuing through Burnaby, Port Moody and Coquitlam, where it links with the Westcoast Express commuter train. There are no downtown stations on this line, but the route connects with the Expo Line at Commercial-Broadway station, with trains that run every two to five minutes.

Our three automated rapid transit SkyTrain or subway lines take you all around Metro Vancouver: Expo Line connects Downtown Vancouver with the cities of Burnaby, New Westminster, and Surrey as its mentioned in Vancouver subway map. Millennium Line takes you from East Vancouver through to Burnaby and into Port Moody and Coquitlam. Canada Line travels between Downtown Vancouver, the Vancouver International Airport (YVR), and Richmond. Rapid transit refers to the automated trains that run above and below ground. SkyTrain consists of the Expo Line and the Millennium Line. A third system called the Canada Line provides the travel from the airport to Downtown Vancouver.