You can find on this page the Vancouver bike map to print and to download in PDF. The Vancouver bicycle map presents the bike routes and lanes of Vancouver in British Columbia - Canada.
More people than ever are turning to their bicycles for travel around Metro Vancouver (see Vancouver bike map). Biking can be the fastest way of getting around, especially in more urban areas. 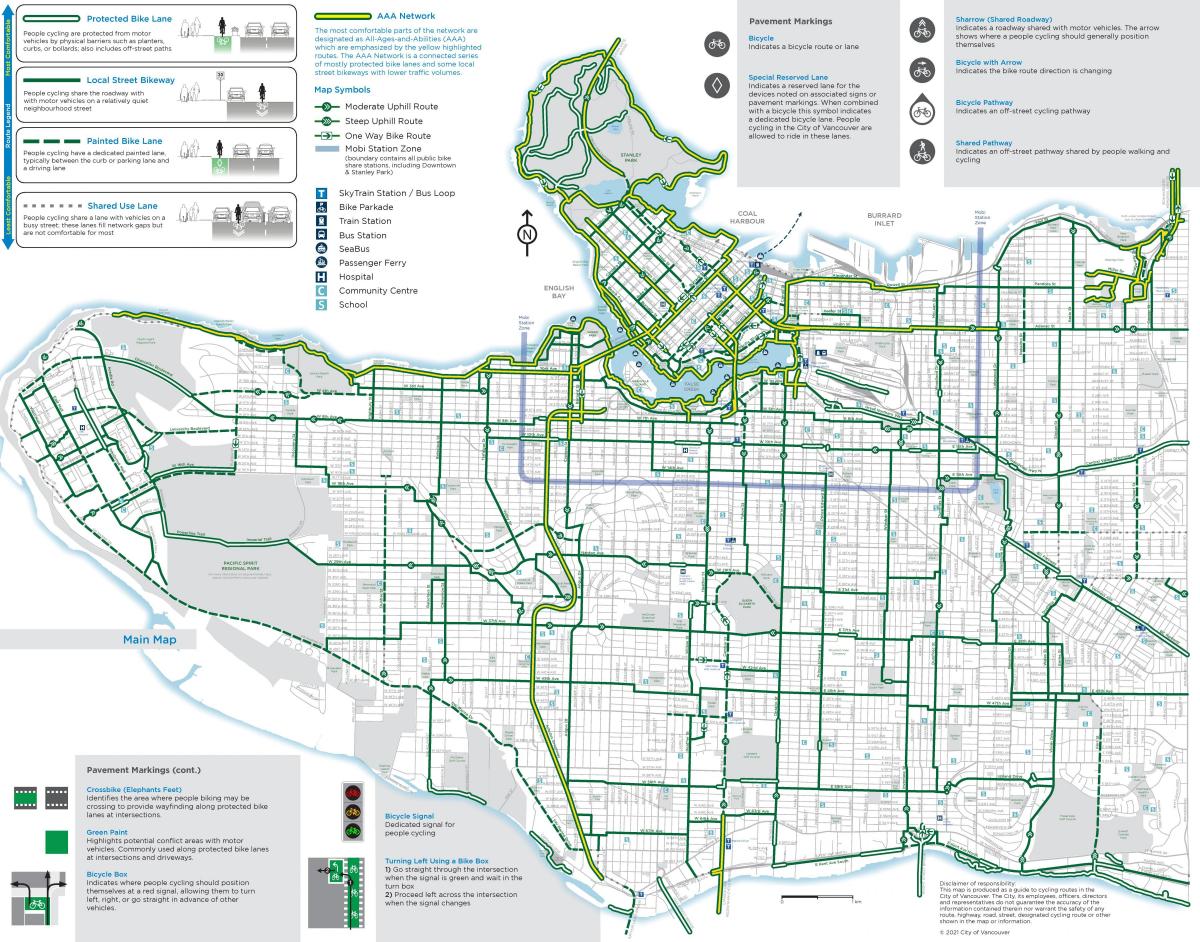 Vancouver is served by a network of over 400 lane-km of on- and off-road bicycle routes as you can see in Vancouver bike lane map. Most of these routes are local street bikeways (also known as bike boulevards), streets that have extensive traffic calming measures such as traffic circles, and signal control to facilitate crossing of major roads. Neighbourhoods are encouraged to plant and care for the circles and boulevards and add public art along bike routes. Since 2004, with the implementation of the Downtown Transportation Plan the City has been adding more bicycle lanes on roads in the densely populated downtown core, signalling its desire to encourage greater commuter use of bicycles. Canada census shows that cycling mode share for the City is 3.7% as compared to 1.7% for the Metro Vancouver area.

Pedal along Sunset Beach – False Creek – Kitsilano Beach a seaside route to see Vancouver beaches and urban waterfront areas. Start at Sunset Beach on the English Bay, where rollerbladers and joggers often share the path and families take advantage of the floating slide and full-time lifeguard. Continue along the path, which circles False Creek, leading you past a number of museums, including Science World and Vancouver Maritime Museum. For a short ride through lush gardens and parks, take the Midtown/Ridgeway or Ontario Street bike route to Queen Elizabeth Park as its mentioned in Vancouver bike lane map, where you will find Quarry Gardens, an arboretum and the Bloedel Floral Conservatory. After checking out the various green spaces, pedal west along 37th Avenue to reach the VanDusen Botanical Garden, where plant species from around the world are on display year-round.