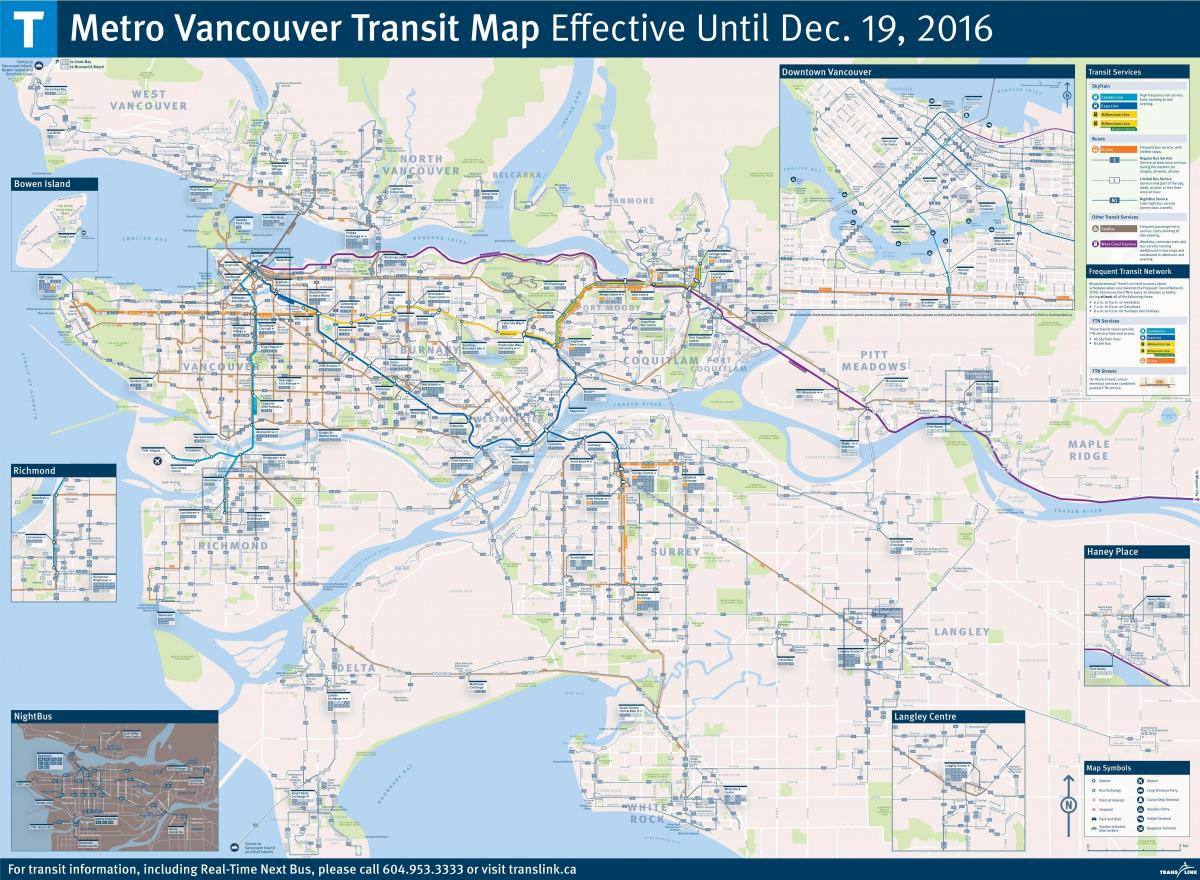 Bus service operates throughout most the region under a private subsidiary known as Coast Mountain Bus Company. Service in West Vancouver and Lions Bay is contracted through West Vancouver Blue Bus as you can see in Vancouver bus map. All buses are wheelchair accessible and a large number carry bike racks, able to carry one or two wheelchairs and bicycles respectively. Unlike other North American cities which are in the process of phasing out trolleybus service, Vancouver is actively maintaining and upgrading its fleet. With recent purchases of 188 E40LFRs and 40 E60LFRs from New Flyer Industries, the trolley network will serve the downtown core with fully wheelchair accessible and bike friendly zero-emission buses. Certain diesel commuter buses which travel to the suburbs as RapidBus have bicycle racks, wheelchair lifts, and comfortable high back Greyhound-style seats. Frequency in Greater Vancouver ranges from every couple of minutes within downtown Vancouver to two to three trips a day in far flung suburbs such as Maple Ridge, Abbotsford, and Aldergrove.

Vancouver good bus routes for visitors as its shown in Vancouver bus map are: 2 – running along Burrard Street from Burrard SkyTrain station, take the “2 MacDonald” over the bridge to Kitsilano for the Museum of Vancouver and other attractions, Bard on the Beach and a day on the beach. 22 – also starting from Burrard SkyTrain station, the “22 Knight” heads east through downtown to Chinatown. 19 – catch the “19 Stanley Park” along Pender Street to get to the heart of Vancouver most famous park. 7 or 4 – running along Granville Street, take the “7 Dunbar” or “4 UBC” to reach Kitsilano 4th Avenue shopping district. 250 or 257 – starting on West Georgia Street outside The Bay department store, the “250 Horseshoe Bay” or “257 Horseshoe Bay Express” head north-west through West Vancouver to reach the BC Ferries terminal. 236 – take the SeaBus over to Lonsdale Quay, then board the “236 Grouse Mountain” to get to Capilano Suspension Bridge and Grouse Mountain.

SeaBus is a unique, passenger-only, wheelchair accessible ferry service that connects downtown Vancouver Waterfront Station to Lonsdale Quay on the North Shore. The scenic crossing of Burrard Inlet takes 12 minutes and offers a breathtaking perspective of the city, sea and mountains. It departs every 15 minutes during the day, and every 30 minutes at night, with the final sailing leaving Lonsdale Quay at 1:00 a.m. (11:00 p.m. on Sundays) as its mentioned in Vancouver bus map. Compass Cards are available online, by phone and at all SeaBus, West Coast Express and SkyTrain Station Compass Vending Machines. They are also available at Compass Vending Machines at London Drugs locations. It is still possible to pay with cash on buses but exact change is needed.